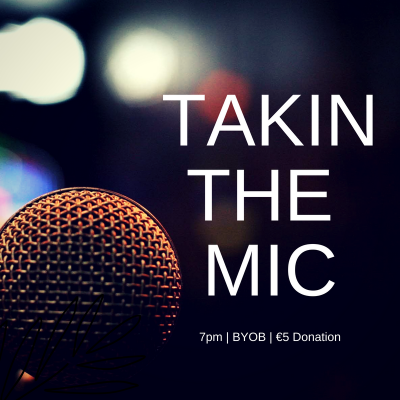 Welcoming all to the first Takin the Mic in our new bi-monthly slot. This August, after a long summer of drought, we’re asking writers, poets and other performers to respond to the theme of ‘Plenty’.

Our guest MC for the evening is Dublin writer Daniel Seery who will be joined by special guest Melatu Uche Okorie.

Daniel Seery is a writer from Dublin.  He is a regular contributor to RTÉ’s Art show Arena and his work has appeared in various publications including The Irish Times, The Stinging Fly and The Dublin Inquirer. A former writer in residence in the Axis Art Centre, his stage play The One We Left Behind toured a number of venues in Dublin while his play Eviction was a winner of the Shadow of the Rising competition in 2016. He is a previous winner of the Irish Writers’ Centre Novel Fair Competition and his debut novel A Model Partner, originally published by Liberties Press, is due to be released in the U.S. with publisher Melville House.

Melatu Uche Okorie is a writer and scholar, currently living in Sligo with her daughter. Born in Nigeria, Melatu moved to Ireland in 2006. It was during her eight and a half years living in the direct provision system that she began to write. She has an M. Phil. in Creative Writing from Trinity College, Dublin, and has had works published in numerous anthologies. In 2009, she won the Metro Éireann Writing Award for her story ‘Gathering Thoughts’. Melatu has a strong interest in issues concerning the welfare of asylum seekers and migrant education in Ireland and is currently studying for a PhD in Education at Trinity College, Dublin. This Hostel Life (Skein Press, May 2018) is her first book.