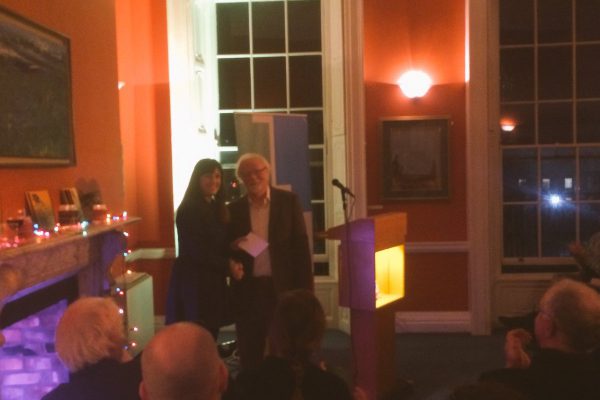 Last week we were delighted to award Henrietta McKervey the Jack Harte Bursary at a celebratory evening with IWC members and friends, on Thursday 8 December at the Irish Writers Centre. This is the third year of the Bursary which is presented in association with Annaghmakerrig at the Tyrone Guthrie Centre, and offers writers a two-week fully resourced residency in spring 2017. The award was named in Jack Harte’s honour as the unsung hero of the literary scene; he has been instrumental in the establishment of the Irish Writers’ Union and, later, the Irish Writers Centre. Liz Nugent was the first recipient of the award in 2015 and Sarah Moore Fitzgerald was the 2016 recipient.

Henrietta McKervey is a fiction writer and design and advertising copywriter. She has published two novels: What Becomes of Us (Hachette, 2015) and The Heart of Everything (Hachette, 2016). She has a MFA in Creative Writing from UCD and has been described by Éilís Ní Dhuibhne as:

‘a novelist in the early stages of her career, brimming over with promise. She has wit, imagination, and an understanding of human beings, which are the hallmark of the true novelist. In addition she has the drive and perseverance every serious writer needs.’

On receipt of the bursary Henrietta commented:

‘The Jack Harte Bursary will have a huge impact for me as an individual – the time and space to work on a book without the demands of what passes for ordinary life getting in the way is a wonderful opportunity. But what I think makes this award particularly special is that it’s not created as an acknowledgment of previous work; a book already written. Instead, every year the IWC makes an investment in a new project, something as yet unwritten (or at the very least, unfinished). It seems to me that the world generally has come to lack faith in the power of ideas. That the IWC continues to show its faith in the future of writing in Ireland, in the importance of continuing creativity and ideas, is what makes this award special.’