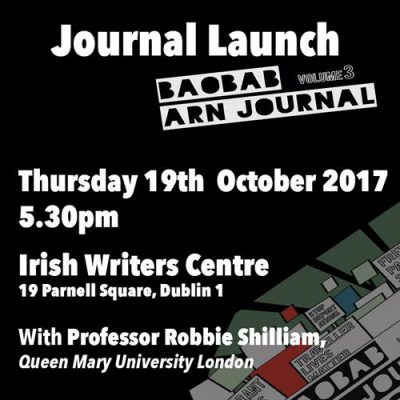 Anti Racism Network is honoured to host Professor Robbie Shilliam at the launch of the Baobab Volume 3, The ARN Journal on Thursday 19th October 2017.

Join us at 5:30pm for a workshop with Professor Robbie Shilliam themed, ‘Colonial Histories of the White Working Class’. The Baobab launch will follow with presentations from some of the contributors.

About our guest speaker:
Robbie Shilliam is Professor of International Relations at Queen Mary University London. His publications include: The Black Pacific: Anticolonial Struggles and Oceanic Connections (2015) and (with Alex Anievas and Nivi Manchanda) Race and Racism in International Relations: Confronting the Global Colour Line (2014).
Robbie works with various Rastafari and Black community organisations, co-convenes the British International Studies Association’s Colonial/ Postcolonial/Decolonial working group, is a member of the International Advisory Board of the Transnational Decolonial Institute, and a Runnymede Trustee. He blogs at thedisorderofthings.com and robbieshilliam.wordpress.com