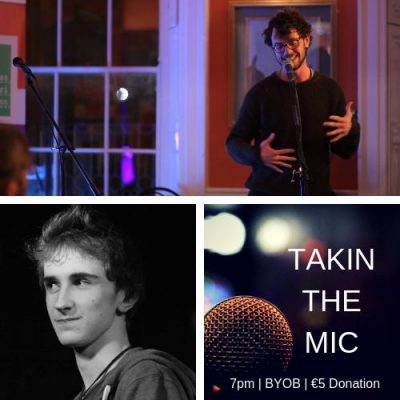 Welcoming poets, prose writers, songwriters and musicians, comedians and anyone else who wants to have a go at our monthly open mic night. Guest MC on the night is Cormac Fitz and special guest performer is Stephen Clare.

Cormac Fitz is a spoken word poet and performance artist from Dublin. He writes about life, death, and some things in between and has performed in such exotic locations as Joe Lees Bar, Tullamore, the International Bar, Dublin city, and the Old Bakehouse, Miltown Malbay.

Stephen Clare is an award-winning poetry and spoken word artist living in Dublin. He is the reigning All Together Now slam champion, a multiple time winner of Slam Sunday, and a runner-up in the inaugural Lingo slam. His work has been featured on RTE television and radio several times in recent years. He also writes bespoke poems on a typewriter; making poetry fun, messy, and accessible.