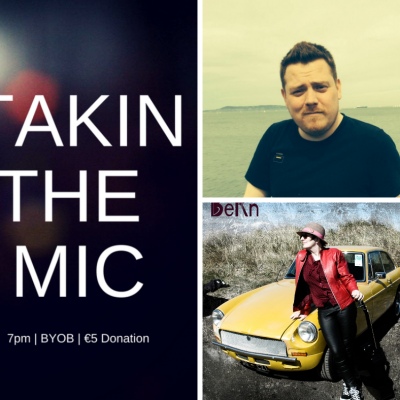 Note: Performance spaces are all booked out but you can add your name to the performers waiting list here

Welcoming poets, prose writers, songwriters and musicians, comedians and anyone else who wants to have a go at our September open mic night.

Mark Ward is the author of the chapbooks Circumference (Finishing Line Press, 2018) and Carcass (Seven Kitchens Press, 2020). He has been featured in The Irish Times, Poetry Ireland Review, Skylight47, Cordite, Softblow, Assaracus, and many more including anthologies, the most recent of which is Lovejets: Queer Male Poets on 200 Years of Walt Whitman. He is the founding editor of Impossible Archetype, an international journal of LGBTQ+ poetry. He is currently working on his first full-length collection, Nightlight.

BeRn is a singer/songwriter/guitarist/poet who calls her stuff ‘Frock’ – an eloquent mix of folk, punk angst, rock ‘n’ roll, feminism, ire, laughter and irrepressible spirit. She has recorded 3 albums and a new EP, Tales from my Back Pocket. The founder of the critically acclaimed  Eastrogen Rising: a rebel cabaret, she is a core member of the new production Revolting Women: a rebel cabaret. BeRn is also an experienced performance poet. She has won The Lingo NYF poetry slam, Clarinbridge Festival Slam, Dublin Fresh Slam, Dublin Sunday Slam and has been a finalist at Cuirt Slam twice. See more at www.bernmusic.ie

– Five mins per performer
– BYOB
– Slots are on a first come, first served basis
– Performers should sign up in advance via Eventbrite (booking not yet open).