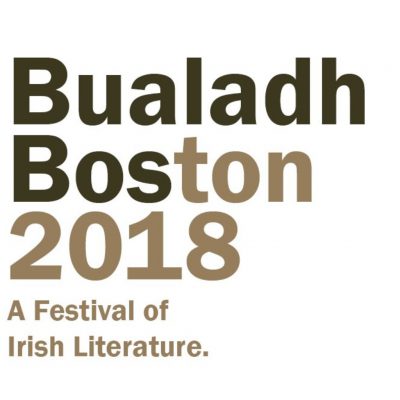 In the Irish language, the phrase Bualadh Bos is used to express applause. On Friday 2nd and Saturday 3rd March 2018, the Irish Writers Centre, Poetry Ireland and the Consulate General of Ireland are delighted to present some of Ireland’s finest contemporary writers in historic Boston, the capital of Irish America, in conversation with local champions of the Boston arts world for novel insights into Irish literature today.

Paul Muldoon was born in County Armagh and grew up in the Moy, County Tyrone. He is the author of 12 collections of poetry, including Moy Sand and Gravel, which was awarded the 2003 Pulitzer Prize, Maggot (2010), and One Thousand Things Worth Knowing (2015). The Word on the Street, song lyrics, appeared in 2013. He was poetry editor at The New Yorker until November 2017 and was awarded The Queen’s Gold Medal for Poetry 2017. He lives in New York and teaches at Princeton University.

Robert Pinsky‘s recent book is At the Foundling Hospital, nominated for the Nation Book Critics Award in poetry. As Poet Laureate of the United States (1997-2000), he founded the Favorite Poem Project, featuring the videos at www.favoritepoem.org. His “Art of Poetry” videos are at http://www.bu.edu/artofpoetry/.
His best-selling translation The Inferno of Dante received the Los Angeles Times Book Award and the Harold Morton Landon translation prize. His other awards include the Lenore Marshall Prize, the Korean Manhae Prize, the Italian Premio Capri and a Lifetime Achievement Award from the Pen American Center. He performs with pianist Laurence Hobgood on CDs PoemJazz and House Hour, from Circumstantial Productions.

Boston Globe columnist Kevin Cullen speaks to historian Alvin Jackson about Judging Redmond and Carson: Comparative Irish Lives, his new book about John Redmond and Edward Carson, who were perhaps the most famous Irishmen in Britain, and in the United Kingdom parliament, at the beginning of the 20th century. Both were key protagonists of the bitter conflict over Irish Home Rule in the years before 1914, and as such, they were readily viewed together by contemporaries.  But, with partition, independence, and the widening of the fissure between nationalism and unionism, this linkage was broken. Using the evidence of their two careers, Jackson’s book comments more generally on the functioning of multi-national union states in early 20th century Europe.

American author Molly McCloskey spent 25 years of her adult life in Ireland, before returning to the United States in 2014. Her most recent novel, Straying explores themes of home. Here she introduces two of Ireland’s leading new fiction authors: Mary Costello and Sally Rooney.

Galway-born Mary Costello’s most recent novel, Academy Street, was shortlisted for the International Dublin Literary Award, the Costa First Novel Prize and the EU Prize for Literature. It won the Irish Novel of the Year Award and the overall Irish Book of the Year in 2014.

Sally Rooney is the author of Conversations with Friends and the editor of The Stinging Fly magazine. Her writing has appeared in The New Yorker, Granta, The White Review, and elsewhere. In 2017 she was awarded The Sunday Times Young Writer Award. She was born in Mayo, and lives in Dublin.