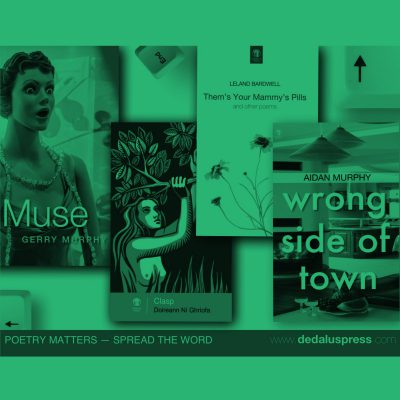 All are welcome to attend the launch of four new poetry collections by Dedalus Press:

There will be readings from Doireann Ní Ghríofa, Gerry Murphy and Aidan Murphy, on the night, and Leland Bardwell’s son will make a brief appearance on her behalf.

Doireann Ní Ghríofa is an award-winning bilingual poet, living in Cork Among her awards are the Ireland Chair of Poetry Bursary 2014-2015, The Wigtown Award for Gaelic Poetry and two Arts Council literature bursaries. Her poems have been listed for many prizes including the Pushcart Prize (USA), The Venture Award (UK), the Strokestown Poetry Prize and the Jonathan Swift Award.  Her Irish-language collections Résheoid and Dúlasair are published by Coiscéim, and a bilingual chapbook, A Hummingbird, Your Heart, was issued by Smithereens Press.

Gerry Murphy was born in Cork in 1952. His poetry collections include A Small Fat Boy Walking Backwards (1985, 1992) and five previous collections from Dedalus, Rio de la Plata and All That (1993), The Empty Quarter (1995), Extracts from the Lost Log-Book of Christopher Columbus (1999), Torso of an Ex-Girlfriend (2002) and My Flirtation with International Socialism (2010). Dedalus also publish End of Part One: New and Selected Poems (2006). Murphy’s poems have appeared in many journals and anthologies, and Pocket Apocalypse, his translations of the Polish poet Katarzyna Borun-Jagodzinska, appeared in 2005 from Southword Editions.

Aidan Murphy is a Cork-born poet residing in Dublin. He was twice recipient of The Patrick and Katherine Kavanagh Fellowship. His collections include The Restless Factor (1985), The Way the Money Goes (1987) – a Poetry Book Society recommendation – Small Sky, Big Change (1989), Stark Naked Blues (1997), Looking in at Eden (2001). Neon Baby: New and Selected Poems was published in 2007.

Leland Bardwell was born in India, and lives in Sligo. She has published five novels, most recently Mother to a Stranger which was a bestseller in translation in Germany, while her early novel The House was recently issued in their classic series by Blackstaff Press. Numerous radio plays and stories have been broadcast on RTÉ radio and her stage plays include The Life of Edith Piaf. Her most recent poetry collection is The Noise of Masonry Settling (Dedalus, 2006). Her memoir, A Restless Life, appeared in 2008 from Liberties Press. The recipient of the Marten Toonder Award in 1993, and the Dede Korkut Short Story Award from Turkish PEN in 2010, she is a co-editor of the long-running literary magazine, Cyphers, and a member of Aosdána.

About The Dedalus Press

The Dedalus Press is one of Ireland’s best known and longest running literary imprints, specializing in the best in contemporary Irish poetry and poetry from around the world in translation. Founded in 1985 by poet John F Deane, the press is now run by poet / broadcaster Pat Boran and publishes an average of ten new titles per year. It is widely recognized as one of the most proactive Irish literary publishers, particularly in relation to reaching new audiences in Ireland and abroad.