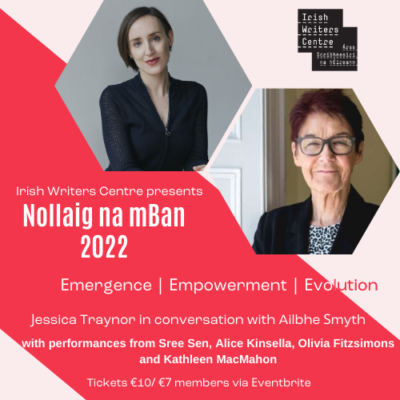 The Irish Writers Centre is delighted to present Nollaig na mBan 2022 to celebrate the achievements of women in Ireland and internationally.

Our annual event will be continuing the spirit of Nollaig na mBan virtually, bringing the sense of community and connection to your homes, since in-person gatherings are not yet possible.

The theme for 2022 is Emergence, Empowerment, Evolution; three strands that represent the present, past and future of women in society, with readings and discussions on these subjects.

In Emergence,  Jessica Traynor, the evening’s MC, reflects on what has been lost for our writing communities through the long months of lock down, whilst reading relevant poems from her collections.

In Empowerment, we’re looking back on seminal moments in Irish history, when following a fight, Irish women have emerged as more empowered. Ailbhe Smyth will be interviewed by Jessica Traynor while Kathleen MacMahon will highlight what the lives of some fledgling Irish women writers might have looked like in those days in the context of the life of her grand-mother Mary Lavin.

In Evolution, we’ll hear from writers who are involved in the latest IWC initiative aimed at mid-career writers, including Olivia Fitzsimons, Sree Sen will speak about her research on human trafficking in India and Alice Kinsella  reads a bespoke piece of creative writing on the evolution of the personal and collective relationship with nature and place within her writing.

We will also be carrying on the tradition of our book swap this year by asking you to amplify the work of your favourite women writers via social media. We invite anyone who would like to get involved with this year’s Nollaig na mBan to post a picture of your work or the work of a woman writer to Instagram or Twitter, tag us @IrishWritersCtr and use the hashtag #NollaigNamBan to help us in sharing some great reading recommendations among our community of writers.

So relax, put on the kettle and dig out the last of the Christmas cake this January 6th as we gather together in the digital sphere to celebrate Nollaig na mBan 2022.

Jessica Traynor is a poet, essayist and librettist. Essays and articles have recently appeared in Winter Papers, The Dublin Review, Banshee, Tolka and We Are Dublin. Slapped Actor, a book of essays, has been longlisted for the Fitzcarraldo Editions Essay Prize and the Deborah Rogers Foundation Award in 2021.Awards include the Ireland Chair of Poetry Bursary and Hennessy New Writer of the Year. Paper Boat, a new opera commission from Irish National Opera, will premiere in 2022. Her third collection, Pit Lullabies, will be published by Bloodaxe Books in March 2022, and is a Poetry Book Society Spring Recommendation.

From India, Sree Sen relocated to Dublin, Ireland in 2019. Her creative works have appeared in Poetry Ireland Review, Dedalus Press ‘Local Wonders’ anthology, Honest Ulsterman, bath magg, The Night Heron Barks and others. She’s the winner of UCD Maeve Binchy Travel Award 2020; recipient of the Cill Rialaig Residency 2020 and Agility Award 2021 by Arts Council of Ireland. Currently working as a digital content specialist for Skein Press. Her debut poetry pamphlet Cracked Asphalt will be published by Fly On The Wall Press (UK) on August 12, 2022. As a journalist, her articles have appeared in The Hindu BusinessLine, Firstpost, DNA, Times of India and other media platforms.

Kathleen MacMahon is a novelist, short story writer and journalist. Her first novel, This Is How It Ends, was published to great critical acclaim in 2011. It was a Number One Bestseller for five weeks in Ireland and a Richard and Judy Book Club pick in the UK. It was also nominated for two Bord Gáis Energy Irish Book Awards, and for the Kerry Group Irish Novel of the Year. This Is How It Ends was translated into over twenty languages. Her second novel, The Long, Hot Summer, was published in 2014 and also became a bestseller. Her third, Nothing but Blue Sky, was longlisted for the Women’s Prize for Fiction 2021. Her short stories have been published in The Stinging Fly, The Irish Times and The Lonely Crowd, among others. A former reporter with Ireland’s national broadcaster, RTÉ, Kathleen is the grand-daughter of the short story writer Mary Lavin.

Ailbhe Smyth was the founding head of Women’s Studies at UCD and has written about Irish society, culture and politics. A long-time feminist, LGBTIQ and socialist activist, she was centrally involved in the Marriage Equality campaign in 2014. She co-founded the Coalition to Repeal the 8th Amendment, and was co-director of the Together for Yes national referendum campaign. Currently, she is Chair of Women’s Aid, and also of Ballyfermot STAR Addiction Services, and is a director of Age Action Ireland. She is a founding member of Le Cheile: Diversity not Division, and also of Climate Coalition Ireland. Ailbhe’s role in the Together for Yes campaign was recognised by her inclusion on the Time Magazine list of the world’s 100 most influential people in 2019.

Olivia Fitzsimons is from County Down, Northern Ireland but now lives in Wicklow. She never lost her accent. She is the recipient of a Literary Bursary Award from The Arts Council/An Chomhairle Ealaíon and a Support for the Individual Artist grant from the Arts Council of Northern Ireland, and is currently one of twelve writers selected for the Irish Writers Centre Evolution Programme. Her debut, The Quiet Whispers Never Stop, will be published by John Murray in April 2022.

Alice Kinsella was born in Dublin. Her poetry pamphlet Sexy Fruit (Broken Sleep Books) was a Poetry Book Society Spring 2019 Selection. She edited Empty House: poetry and prose on the climate crisis (Doire Press, 2021). Kinsella’s creative non-fiction debut Milk will be published by Picador in 2023. She lives in Co. Mayo.

This is an Irish Writers Centre initiative supported by the Arts Council of Ireland. 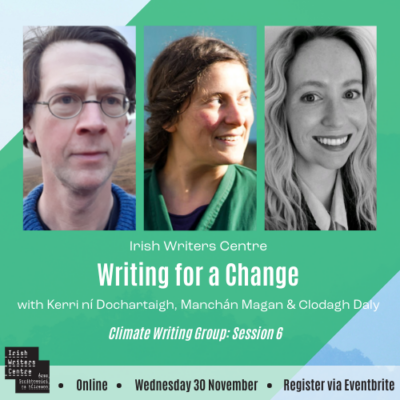 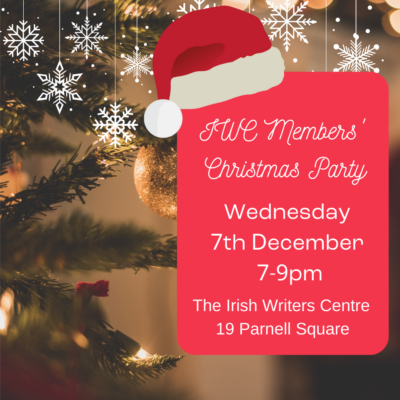