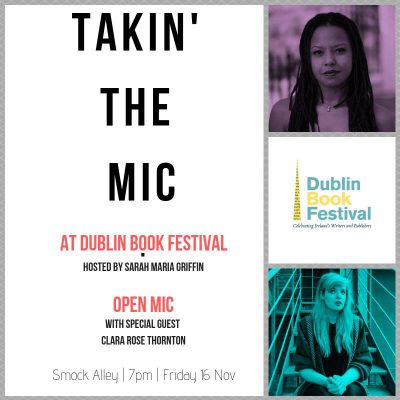 Takin’ the Mic At DBF

The Irish Writers Centre’s Takin’ the Mic returns to Dublin Book Festival for an evening of poetry and prose. Hosted by writer Sarah Maria Griffin, the evening will feature a guest performance from Clara Rose Thornton, along with our usual open mic slots for poets, writers, musicians and comedians. For general admission, see the Dublin Book Festival website.

Sarah Maria Griffin‘s first novel Spare and Found Parts was published by Greenwillow Books in October 2016 and will be in early 2018 by Titan. Her non-fiction has appeared in Buzzfeed, The Rumpus, Guts and Winter Pages. Her collection of essays about emigration, Not Lost, was published by New Island Press in 2013. She was the recipient of the European Science Fiction Awards, Chrysalis Award in 2017. She tweets at @griffski.

Clara Rose Thornton is a spoken word artist, culture journalist, event organiser, and RTÉ radio and television broadcaster. Her work focuses on the arts and their intersection with social justice, identity politics, history, and place. She is a multiple slam poetry champion, including a three-time Dublin/Leinster Poetry Slam Champion. Her print cultural criticism is published internationally, including in the Irish Independent and the Irish Times. Clara Rose is Chicago-born (and proud), New-York-simmered, Dublin-dwelling.

– Five mins per performer
– Slots are on a first come, first served basis
– Performers should sign up in advance via Eventbrite (free!)