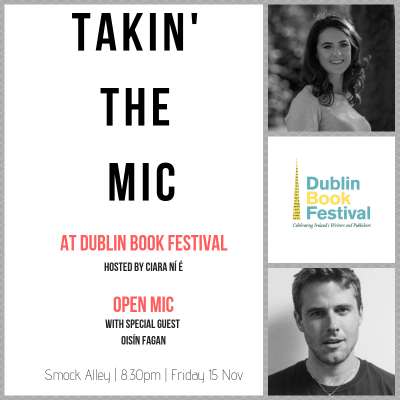 Takin’ the Mic returns to Dublin Book Festival on Friday 15 November for an evening of poetry and prose at Smock Alley Theatre. Poet Ciara Ní É will be our host for the night, with a special guest performance from Oisin Fagan!

Dubliner Ciara Ní É (sounds like KNEE YAY) is the founder of REIC, a monthly bilingual spoken word and open mic night that features poetry, music, storytelling and rap. She has performed her work in Ireland and internationally. She has been published in a variety of journals including Icarus and Comhar, and in 2018 she released a series of 4 poetry videos in partnership with the Irish Writers Centre. Ciara’s commission include UNESCO’s Dublin City of Literature video 2015, and a poem for Seó Beo Pheil na mBan on TG4, which received more than 300,000 views online.

Oisín Fagan has had short fiction published in The Stinging Fly, with work featured in the Irish Museum of Modern Art. In 2016, he won the inaugural Penny Dreadful Novella Prize for The Hierophants. Hostages, his debut collection, was also published in 2016 by New Island and in 2018 by Head of Zeus. His debut novel, Nobber, was released by JM Originals in July, 2019.

– Slots are on a first come, first served basis

– Performers should sign up in advance via Eventbrite (free!)