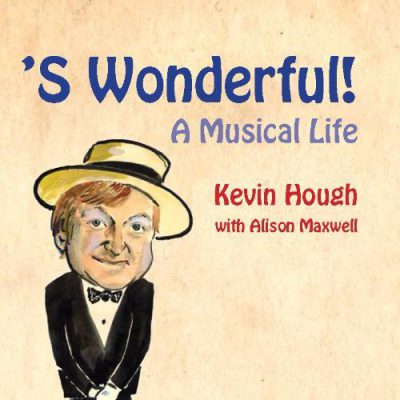 If Kevin Hough’s life was a musical it would be filled with colour and light and shoe-tapping, breathtaking routines. ‘S Wonderful! portrays his sense of fun, his love for family and friends, and the sheer hard work it took to pursue his life’s passion in the world of entertainment.

On stage, Kevin has been principal lead, song and dance man, panto villain, panto dame, cabaret artist and television personality. He has played piano at the American Embassy Dublin and in leaky tents, at Áras an Uachtaráin and on trains. Behind the scenes he is a concert promoter, musical director and producer, adjudicator and talent scout.

Kevin combined his love of theatre with a demanding job on RTÉ Radio as presenter/producer. He produced Poparama, the flagship programme on Radio 2FM, and for 25 years spearheaded the children’s national song contest. As presenter of Radio 1’s Theatre Nights and the In Concert series Kevin travelled around the country and to London and New York to talk with such people as Niall Tóibín, Sian Phillips, Geraldine Fitzgerald, Maureen Potter and Shirley Bassey.

Whether it was chasing bluebottles around his father’s shop or the early days on RTÉ Radio when a mouse chased across Treasa Davison’s desk at the GPO, donning the habit with Brendan Grace at the Gaiety or chewing paw paw fruits in Kenya, recording behind bars at Mountjoy or directing children in The Sound of Music, riding a tank in the Lebanon or hanging out of a helicopter over Dublin, Kevin Hough’s life has been high on energy and drama; it’s been ‘S Wonderful .

About the Authors
Kevin Hough is a former producer/presenter with RTÉ Radio. Alison Maxwell is the author of Ronnie: The Authorised Biography of Veronica Dunne and Jammet’s of Dublin.