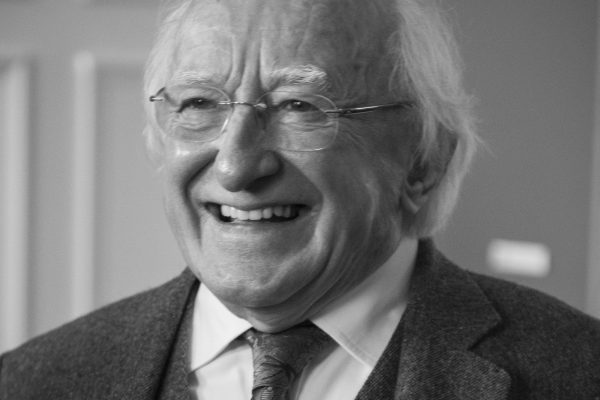 On Wednesday 13 January 2016 we welcomed the President of Ireland, Michael D. Higgins, in recognition of his patronage which marked the beginning of our 25th year celebrations. Writers and IWC Ambassadors, Éilis Ní Dhuibhne and Joseph O’Connor read for the President, as well as Sarah Moore Fitzgerald, the recipient of this year’s Jack Harte Bursary Award. Musician Colm Mac Con Iomaire debuted his beautiful composition Solasta to a packed room of writers and distinguished guests – and wowed us all. The President addressed attendees with a speech that ranged in content from Bowie and Hot Press to Descartes and civil society…

President Higgins outlined how the Centre is not just a haven but a vortex of creativity:

‘In the hallways and stairwells of this old house, frameworks of novels, opening paragraphs of stories, and geneses of poems have been inspired and created. A considerable number may have been completed but perhaps the finest are still in gestation.’

We couldn’t have wished for a better start to our 25th anniversary celebrations.

[The announcement of six new ambassadors for the Irish Writers Centre is an event, important not only for writing, but for the celebration of creativity as the spirit of sustainability and critical change in society.]

Here, in 19 Parnell Square, a genuine community has grown and flourished. It, like all truly functioning communities, has had to craft its own ethic of solidarity, one that is based on equality, full participation, and genuine respect for the many differing voices that makes up its whole. It is thus more accurately described as a vortex rather than a haven.

It is for that reason that I am very proud to be Patron of the Irish Writers Centre; especially today as six of Ireland’s most renowned writers – John Banville, Anne Enright, Roy Foster, Marian Keyes, Eilis Ni Dhuibhne and Joseph O’Connor – are accepting appointment as Ambassadors for the Centre, marking another milestone in the life of this cultural space.

May I thank Liz McManus and Valerie Bistany for their kind invitation to join you on this occasion, and all of you for your most generous welcome.

This year, as you mark your twenty fifth anniversary, you can recall with pride a sense of achievement the many writers – fledgling, professional, published and unpublished – who have participated in the life of the Centre, whose work took wings across those years, from participation in the ethos and facilities of the centre.

All writers gain from interaction with other writers, and the writing community needs support structures that will allow it to thrive and prosper. It was indeed a similar spirit of mutual respect, concern and the ethics of friendship that exists within Ireland’s artistic community, that inspired the foundation of Aosdána. That was a critical moment in our cultural history as we acknowledged the important role that artists play in a democratic society.

Writers have come to the Centre as tutors, as students, as members of writing groups, and as enthusiastic audiences to the many events that have taken place. In the hallways and stairwells of this old house, frameworks of novels, opening paragraphs of stories, and geneses of poems have been inspired and created. A considerable number may have been completed but perhaps the finest are still in gestation.

All of the authors instinctively understand the power of language in its subversive capacity to reveal, illuminate and reflect society in all its dimension – be it by recreating of time, place and character of a past era and in interpreting and understanding an ignored or lost context. When such is achieved we should be encouraged as a public to declare the beauty of the achievement.

Writers are important. Literature remains a most profound cultural touchstone for any country. The achievements of the writers, thankfully, in an intergenerational sense outlive both its military adventures and its economic pretensions. There is no career ladder for a writer to climb, no promotion to aspire to and, regrettably, no pension to look forward to at the end of a lifetime’s work. While an impulsive creativity, combined with an innate desire to say something to the world, prompts the writer to begin writing, this should not mean that writers should not aspire to the securities attached to citizenship, however it is delivered within different states and cultures.

[Poverty and penury are not necessary or inevitable conditions for the writer or the artist. On the contrary, I have consistently advocated for the necessary social supports to sustain our artistic and literary community – not only in the formative stages of their careers, but also in their later years.]

Indeed, that is why the support structure that is provided by the Writers Centre is such an essential part of our cultural infrastructure, and it is why the contribution that you make to our national life is so invaluable.

In this same year that the Irish Writers Centre marks the twenty fifth anniversary of its establishment, Ireland will be looking back to the seismic events of 1916 which led to the foundation of the independent Irish State. This will be an important year of commemoration. It will also be a time during which we will be called upon to remember our past in a way that is just and ethical, and inspirational of the imagination.

It is a time that will throw into sharp relief the crucial role that writers played in their different ways and at different times; their courageous expressions giving voice to the demand for, and the emergence towards, what was envisaged as a free Ireland; self-ruling, possibly autonomous, even independent. We should never forget, however, that the ferment of writing between 1890 and 1920 is in sharp contrast to early decades of the state that offered us censorship, repression and an authoritarian ethos from which not only economical insouciants but those seeking freedom fled. As we examine our past it is our writers who so often enable us to understand the multifarious experiences that intertwine beneath the surface of any defined era or phase of a nation’s history.

It is so often the separate stories, untangled out of, but not separated from, the orthodox or mainstream that allow us to engage with the reality of our shared past. It is the ability to bring an era and place alive in all its everyday joys and sorrows that places generations in debt to the great writers – whether novelists, short story writers, historians or poets.

[Today, of course, I particularly thank John Banville, Anne Enright, Roy Foster, Marian Keyes, Eilis ni Dhuibhne and Joseph O’Connor who have so generously agreed to act as Ambassadors for the Centre.]

You are already impressive ambassadors for Irish writing, both here in Ireland and across the globe. We are greatly fortunate that you have agreed to extend the hand of friendship and support to so many other members of Ireland’s writing community through your new role here as Ambassadors. As established and renowned writers at home and abroad, your involvement will greatly increase the reach and scope of the Centre’s activities, including its programmes of education and professional development. It will also, I am confident, continue to raise the profile of this valuable facility allowing the centre to grow and develop alongside new generations of emerging Irish writing talent.

May I conclude by wishing you all every success in your role as Ambassadors.